Fried My Pixhawk Mini; Please Help Me Not Do It Again

You are using an out of date browser. It may not display this or other websites correctly.
You should upgrade or use an alternative browser.
G

I had taken the easy route on my first quad and had gone with a DJI Naza, but now I'm ready for something a bit more challenging. My Brother has persuaded me to convert over to Pixhawk. I went with the Pixhawk Mini because it will fit where the Naza was mounted.

I fried it good during the setup.

I had already heard that it was bad to power the Pixhawk through a BEC and through the USB cable at the same time. I was careful not to make that mistake, but it seems that I've found a similar mistake.

My BEC is one of those 5 in 1, shock absorber units (now I'm hearing that maybe that's too much vibration dampening). Anyway, I'm not using the BEC that came with the Mini. Maybe that was my first mistake. I did check the voltages at the pins to make sure the polarities weren't reversed. 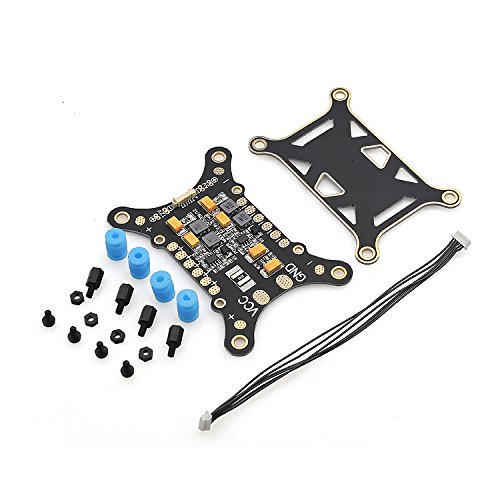 The Pixhawk Mini is connected to a FrSky X8R through the Sbus.

The ESCs are connected to the 8-channel PWM breakout board that came with the Pixhawk Mini.

After successfully completing the QGroundControl setup, I disconnected the USB cable and started powering the Mini through the BEC.

I began calibrating the ESCs, which is when I think the damage occurred.

During ESC calibration, I would disconnect an ESC from the breakout board and connect it directly to channel 3 on the receiver. Then I would disconnect and re-connect the 4S battery with the remote's throttle control at 100 percent. The ESC would beep a series of patterns, and I would back off the throttle when the ESC beeped the pattern for the mode that I wanted to select. Then just for fun, I'd punch the throttle to hear the motor whine.

I went through those steps for each of the ESCs: disconnecting an ESC from the breakout board, connecting that ESC to channel 3, and connecting the battery while the remote was set at 100 percent throttle. The Pixhawk Mini was dead when I connected the battery to calibrate the last ESC.

I think maybe having one ESC connected to channel 3 of the X8R while leaving the remaining ESCs connected to the 8-channel PWM breakout board on the Pixhawk Mini might have created some sort of current loop. Or maybe winding up the channel 3 motor caused the problem.

Anyway, surely I'm not the first person to make this mistake. I was thinking my mistake probably has a name by now. Has anybody heard?

I still want to go ahead with a Pixhawk quad. I've got a PixFalcon on order. Hopefully somebody can tell me what I'm doing wrong before I fry that one as well.

I have not worked with the Pixhawk Mini, but quite a few PH1, 2 and 2.1. I follow the procedures you described without any issues.
The one thing I can recommend is it is never a good idea to have all 4 red wires from the ESCs connected to your PH, instead disconnect three (just use a thin blade to remove the pin from the servo connector). This is mainly to keep the BECs from fighting each other, not to protect the PH.
G

Thanks for your reassuring words Andrew. These ESCs don't have the BECs built in, so I haven't had to worry about cutting the red wires.

My experience today with the new PixFalcon left me once again doubting my sanity. I was extra careful, and the controller worked fine when powering it from the USB, yet it was DOA when trying to power it from a known-good BEC.

I had thought this PixFalcon would be covered under warranty, as I had hoped that the PixHawk Mini should have been covered. Especially with both controllers coming straight out of the box. But again the seller wanted pictures and videos of the controller not working. Half way through the picture-taking this time around I realized that I was still using my known-good BEC. So I got out the BEC that came with the PixFalcon. That new BEC sent up a plume of smoke the moment I hooked it to the 4S battery, before I had even connected it to the PixFalcon. It's going to be awfully difficult proving that it wasn't all my fault. And yes, I had the polarity right.

I know most folks like to get their new gear in a factory-sealed box, but I think I wish the vendor would un-box it and smoke-test it on his side before sending it on to me.

I have serious doubts about the robustness of the 3DR Pixhawk Mini and the PixFalcon form factor.

With these vendors shipping apparently un-tested controllers and then taking forever to acknowledge and hopefully honor warranty claims, I am beginning to think I would have been better off buying the PixRacer knock-off that my brother had recommended, rather than paying extra and expecting the "legitimate" controllers to work out of the box and having vendor warranty support if they didn't work.

Major bummer!
I've only crashed one PH, but it still works.
G

Using the microscope at work, I found the following problem on the PixFalcon: a misplaced SMD. I was able to fix it with surface mount rework tools, but that didn't fix the overall problem of not powering up from the BEC. Maybe it's a good thing that I never got airborne though; that resistor surely would have been connected to something that matters - maybe a sensor. Even though this controller came from a reputable source, it couldn't have passed a bed-of-nails test, or maybe not even a power-up smoke test.

For awhile there I thought maybe I was losing it, having back-to-back dead controllers out of the box. I'm starting to get a feel for what to expect.

3D Robotics promptly sent a replacement for my Pixhawk Mini, and it is working just fine.

I think I might have figured out what I did to fry my first one. While I was doing the initial radio setup in QGroundControl (via USB), my Taranis was getting obnoxious with the low-voltage alarm messages . The messages were a carryover from an old Naza profile in my Taranis, which I had copied in order to create the new profile for the Pixhawk Mini. I had been using one of those FrSky Lipo Battery Sensor telemetry modules on my Naza quad to report cell voltages back to my Taranis. For this new Pixhawk Mini Quad I had purchased and installed another FrSky Lipo Battery Sensor. To shut my Taranis up, I plugged that sensor into the balance pins of a battery. That shut the Taranis up, but it might have also created a current loop.

All of this sounds a bit fishy though. The Pixhawk claims to have the ability to be powered simultaneously from a BEC and redundantly through the USB port. In my opinion that would imply that there is plenty of protective circuitry (diodes) to prevent current from flowing in the wrong direction. Perhaps they didn't anticipate what I did however: in a round-about way, putting an external power source on the Pixhawk's receiver port.

I don't feel like proving my theory though.
A

Thanks for the update! Good to know you may have figured out the source of your problem.
PH1 did indeed advertise that it would accept a backup power source off the servo rail, but they also suggested that you run it through a Diode to prevent current flowing in the wrong direction.
My PH2.1 doesn't allow backup power from the servo rail since they added a second input for a battery monitor. Probably was an issue with the older Pixhawk units.
G

The replacement Pixhawk Mini went belly-up after just a couple of flights. It was the same problem as before: no longer powering up from the PM port, but booting successfully when powered from the USB port. I contacted 3DR, asking for an engineer's help in troubleshooting what I was doing wrong. Two days later, at the end of their shift, they responded with a request for photos of my setup. I responded immediately. The next day, at the end of the shift, they responded that they had noticed that I wasn't using the BEC that came with the Mini, and they wanted me to measure the voltage supplied by my BEC. My voltage was actually more compliant than the BEC that came with the Mini. I responded with the requested information immediately. Today, I hadn't heard back from them as the end of their shift was nearing, so I wrote to them again. They responded that I had voided the warranty, due to misuse. I still haven't heard anything from their engineer. Do they even have an engineer on staff, or is the Pixhawk Mini just a re-branded import from China?

Anyway, I have a pretty good idea that the problem is caused by a current loop that exists when I connect the FrSky Lipo Battery Sensor to the Smart Port on the X8R. I have seen posts in other forums about not connecting the middle (Voltage supply) pin on the Lipo Battery Sensor's Smart Port connection. Apparently the ground pin doesn't even need to be connected.

I have the warranty-replacement PixFalcon waiting to be installed (the previous PixFalcon had died of the same problem). HobbyKing gave me even less hassle than did 3DR when it came to replacing it. Before I fry this one however, I think I'll go through and do a point-to-point impedance comparison between the fried controllers and the new PixFalcon. The PixFalcon schematics show that three redundant power sources (PM, RCIN, and USB) are managed by a power control circuit. There is a least one surface-mount fuse in that circuit that might have been blown. Perhaps I can identify the damaged part and salvage these controllers. By the way, 3DR tech support does not acknowledge RCIN as a valid means of providing power to the Pixhawk Mini.

As far as paying extra for a Pixhawk-family controller that has warranty coverage, I am satisfied that these "legitimate" vendors do honor warranty claims. But I am disappointed in the lack of in-house expertise when it comes to troubleshooting. You're pretty much on your own no matter whose controller you purchase.
M

I attempted yo purchase a Pixhawk 2.1 from 3DR and it seemed like it was taking forever to get here so I called them and they informed me that they no longer were selling the 2.1 and I could get a refund or wait on the new Pixhawk mini. I chose to wait. When I got it, I was a little put out that it wasn't compatible with Mission Planner, so I sat on it a while. I just pulled an old 500 quad out of the junk pile and decided to get it going with the Pixhawk Mini. I set it up on the quad using only what came in the box. Everything was fine except for the GPS. I can't hardly get a GPS Fix with the factory GPS module. I can replace it with the authentic U-Blox M8N + MAG and get a GPS Fix in just a minute and the accuracy so far has been within two feet. I was wondering if you had the same issue?

By the way, I didn't calibrate my ESC's. They had already been calibrated from the last build so I can't help you there.

I can tell you that I had better luck with the EagleTree Vector so far and they seem to be able to help you with any problem you have.
You must log in or register to reply here.

A
4 and 1 esc connection to pixhawk

Any ACRO mode flyers out here want to share your experience?